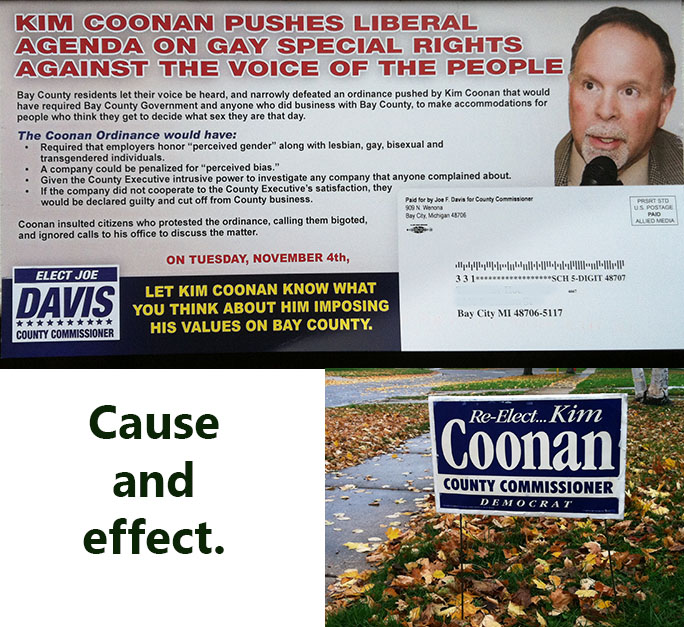 We are doubly blessed (or cursed, depending on your outlook) in this household. Among us we have had voters registered as both Democrats and Republicans, so come campaign time, we get mail from both parties.

So it came to pass that a Republican sent mail to our home, hoping for our vote for him as Bay County Commissioner. Our next-door neighbors have a sign supporting him, and I didn’t give it much thought. I’ve spoken to him in person and he seems like a decent guy.

But oh, the vitriol he sent out. First off, anytime I hear “liberal agenda” I sort of twitch, because I’m fairly liberal and if there’s an official agenda, I’m not getting the memos. “Gay special rights” made me wince, and “against the voice of the people” made me wonder, “Just which people?” Although by now I had a strong suspicion.

It’s an odd little postcard, because its whole topic is a measure that was DEFEATED. I understand if your opponent has differing views you point them out, but this is a dead horse these folks are beating. Isn’t there something more current to debate?

Nonetheless, here it was so I was reading it. By the time I got to the end of the first actual sentence and hit “people who think they get to decide what sex they are that day,” I was so pissed off I just HAD to get one of his opponent’s signs.

I have friends who are deeply conservative. In fact, sometimes I’m a little alarmed how many of my childhood friends have turned out to be Bible thumpers. But I do have friends of pretty much all ilk and even on matters upon which we cannot agree, as long as the tone is respectful I’m cool with that.

This postcard was not respectful. Worse, for a candidate, it displayed a woeful ignorance of those he was protesting. Hey transgendered folk, show of hands: How many of you switch back and forth day to day on what gender you are? (For a good explanation of what “perceived” really means, check out this ThinkProgress story.)

If Joe Davis or anyone else wants me to take his or her views on this topic seriously, then get the language right. To do otherwise shows me a lack of the most cursory research, which is as I said a poor quality in a candidate. To read and understand is not necessarily to adopt and believe; if nothing else, know thine enemy.

This could have been handled differently, respectfully, and still conveyed the same basic message. Joe Davis could have sent out a postcard pointing out this measure Kim Coonan backed, and he could have said, “As a God-fearing man, I believe this is an abomination and I cannot in good conscience stand for it.” I’d have thought, “huh, you and I have different ideas about a loving God and tolerance,” but I wouldn’t have had the frothing reaction that he provoked instead.

Against the voice of the people? Not my voice.

I do my due diligence on candidates, and I’m not done checking out these two. I also shy hard away from being a one-issue voter.

But intolerance and ignorance? Those are two issues.